This report courtesy of the Oswego County Department of Community Development, Tourism and Planning. This report was written on September 27, 2019.

NOTICE: National Hunting and Fishing Day, September 28, 2019, is a designated free fishing day in New York which means anyone can fish the freshwaters of New York and no fishing license is required.

As the lake fishing season winds down anglers are still reporting some good action off the harbor and in the harbor as the salmon begin to make their way up into the river. The morning bite has been the most consistent in the harbor for anglers trolling and or casting lures. Moonshine glow spoons, deep diving thundersticks, J-plugs, meat rigs with cut bait, and flasher/flies are suggested baits. The yellow perch bite is happening right now in the Oswego River and Oswego Harbor. Most anglers are using fathead minnow or worms. Don’t ask specifics about where they are because they move.

After having a low water flow for a few days, the rain we received a couple of days ago caused the river level to rise and new fish entered the river in good numbers on Tuesday. This morning the flow is at 2,510 cfs. With the river temperature still in the upper 60s in the morning, salmon fishing off the wall remains challenging most of the time, yet, the bite has turned on at given times when fresh fish push up river. There are plenty of fish along the wall, downstream of the powerhouse, although they are still tough to catch because they aren’t so aggressive to bite with relatively warm water. Anglers fishing off the wall have been catching salmon with skein under slip floats and with deep diving thundersticks. The morning has been the most productive time to fish the wall. Anglers at the Varick Dam are enjoying some great salmon fishing over the past couple days. Plenty of anglers are pulling out three king limits with only a few browns and steelhead mixed in. Egg sacs, beads, soft plastic eggs, marabou jigs, and skein have all been used to catch salmon at the dam lately. Pink, green and red have been hot colors. Remember that you do need to wear a USCG approved life jacket to wade below the Varick Dam on the Oswego River. 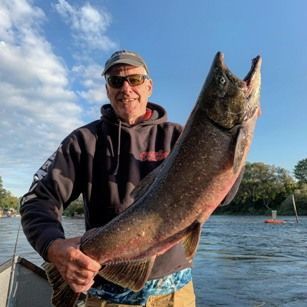 Notice: The bridge to Leto Island is closed, and there are mandatory personal flotation device (PFD)  zones on the river. For more information, view the Brookfield Varick Fish Safely Brochure below. The Oswego Fire Department offers loaner life jackets at no charge through its “Loaner for Life” program. For more information contact the fire station, 35 E. Cayuga St., at 315-343-2161.

Yesterday morning’s rain benefited our day with an unbelievable amount of Cohos moving through the run. The upper sections of the run were reported to experience steady movement and a decent amount of kings stacked in the deeper areas. A good amount of fish were pushing through, as well as quite a lot of large steelhead for this time of year. The middle and lower sections, even though experiencing some slower action, still had steady hookups. Our anglers reported lots of hookups all over throughout the run, and one of our anglers reported going 6/15! The water flow out of Pineville is 425 cfs and from the dam 350 cfs.

On Thursday we had rain showers in the morning but sunny skies peaked through in the afternoon. Areas in the lower end of the river where anglers had action were the Black Hole, Staircase/Longbridge, Town Pool, Ballpark and Papermill.  In the mid to upper end of the river anglers reported fish holding in and around the deeper holes and larger runs such as Sportsman Pool, Pineville, Trestle Pool, Ellis Cove and Schoolhouse Pool.  Anglers have also reported having action in both the Upper and Lower Fly Fishing Zone. Over the last couple of days the most productive patterns have been estaz eggs, sucker spawn, glo-bugs, egg sucking leeches, conehead woolly buggers, conehead muddlers and fish skull zonkers.