This report courtesy of the Oswego County Department of Community Development, Tourism and Planning. This report was written on September 25, 2019.

NOTICE: National Hunting and Fishing Day, September 28, 2019, is a designated free fishing day in New York which means anyone can fish the freshwaters of New York and no fishing license is required.

As the lake fishing season winds down anglers are still reporting some good action off the harbor and in the harbor as the salmon begin to make their way up into the river. A cold front moved through yesterday with rain and cooler temperatures are expected for the next couple of days. This may spark a push of salmon up through the river.

Monday saw a sharp increase in the waterflow with the rain during the day. It reached almost 6,000 cfs but has settled back to 3,500 cfs as of this morning. Anglers have been finding salmon from the wall and at the dam. Hopefully the higher waterflow and cooler temperatures will produce increased action throughout the river. Thundersticks and beads are the choice of baits. 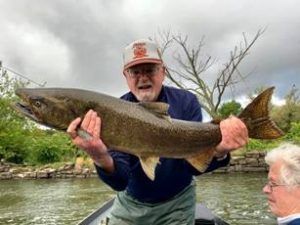 The Oswego River is still hot but I mean water temperature – 69.8 degrees at 7 am. The kings aren’t too happy about it either but my clients worked hard and captured a few.

Yesterday afternoon brought generally kings with spotting’s of a few steelhead, browns, and Cohos. There definitely is a better number of steelhead beginning to show up. Our river patrol concluded that, overall throughout the run, there was good movement particularly in the afternoon. Kings moving in 1’s and 2’s with pockets of 5 and flurries of movement throughout the run of kings and Cohos. Around the midsection of the run in the late afternoon there were reports of consistent hookups. Up through the north channel there were quite a few fish jumping which leaves us hopeful that they will put their noses up into the run! The water flow out of Pineville is 419 cfs and from the dam 350 cfs.

On Tuesday we had some cooler weather conditions with the temperature in the 60’s along with some scattered showers. The reports varied from the anglers we spoke with, but overall most anglers were able to find some fish and have a few hook ups. Areas of the lower end of the river producing some action were the Black Hole, Town Pool and Ballpark. In the upper end of the river anglers reported getting into fish at Pineville, Trestle Pool, Schoolhouse and both fly fishing areas. The most productive patterns were fish skull buggers, egg sucking leeches, conehead muddlers, beadhead zonkers, comets, glo-bugs, estaz eggs and sucker spawn. 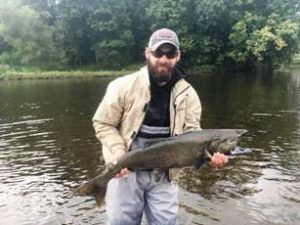 Tuesday was a bit of a grind for us.  There wasn’t any movement in the lower end but we made a few count and our clients were happy.