This report courtesy of the Oswego County Department of Community Development, Tourism and Planning. This report was written on September 24, 2019.

As the lake fishing season winds down anglers are still reporting some good action off the harbor and in the harbor as the salmon begin to make their way up into the river. A cold front moved through yesterday with rain and cooler temperatures are expected for the next couple of days. This may spark a push of salmon up through the river. 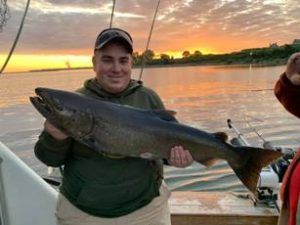 Yesterday saw a sharp increase in the waterflow with the rain during the day. It reached almost 6,000 cfs but has settled back to 3,500 cfs as of this morning. Anglers have been finding salmon from the wall and at the dam. Hopefully the higher waterflow and cooler temperatures will produce increased action throughout the river. Thundersticks and beads are the choice of baits.

On Saturday the most productive area of the run as reported by the River Patrol was between the Wall Hole and Joss Hole. The hook-ups were numerous and many fish were landed. On Sunday the Coho Hole saw heavy fishing after 3 pm. The rest of the run was steady between 12-3 pm but seemed to quiet down after 4 pm.  Fishing was steady at the Flats and the Joss Hole.  The estuary had fish holding in place. The water flow out of Pineville is 419 cfs and from the dam 335 cfs.

Anglers we spoke with Sunday who fished the lower end of the river reported having some action around the Black Hole, Staircase/Longbridge, Town Pool and Ballpark. In the mid to upper section of the river anglers reported kings holding in and around the deeper holes and larger runs. The lower end of the river as well as the deeper holes in the upper end of the river have been getting the most fishing pressure on a daily basis. If you’re willing to walk and looking for some solitude the mid-section of river is always a good choice. The upper and lower fly zones are both currently open and the few anglers we spoke with who fished them reported having some action at both areas. The most productive patterns have been woolly buggers, egg sucking leeches, comets, estaz eggs, sucker spawn and glo-bugs.