This report courtesy of the Oswego County Department of Community Development, Tourism and Planning. This report was written on September 19, 2019.

The lake fishing out of Oswego is still good. A small pod of salmon have moved into the harbor area. So you can fish the harbor for spawning fish or head offshore for next year’s class of salmon and steelhead. If you are looking to do more lake trolling in the Port Ontario area, the fishing in front of the Salmon River has really heated up the last few days.

According to Strike Zone Charters:

The fishing over the last few days has been great with the exception of Monday which was a difficult day. Tuesday was especially exciting with our group landing 15 by 11:30 am.

According to Larry’s Salmon Tackle:

The river flow has varied reaching about 4,500 cfs on Monday and dropping back to just over 1,000 cfs on Tuesday. Yesterday it was running at 1,970 cfs but has dropped to 1,300 cfs this morning.  The salmon fishing did pick up somewhat over the weekend in the Oswego River. Thundersticks and beads are the choice of baits.

Salmon season is in full swing and that means summer temperatures are back. I love the sun and warmth but salmon do not. That being said we squeaked out a good day today in the DSR including a large smallmouth bass, but the warm temperatures have us all concerned. We get through the next three days and we should be good. 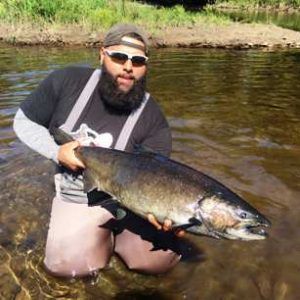 Wednesday started with a cold morning which turned quickly into a gorgeous day. Anglers experienced exceptional fishing with lots of movement and multiple hookups. As the sun rose, movement only diminished a small bit across the run. However as late afternoon hit, fishing quickly picked up with hookups hitting the double digits. An angler returned from the run saying he saw nothing but huge fish in the upper and middle areas of the run. The Cohos that we have seen the past several days seem to have moved up river. Again today, a couple of browns were taken. The water flow out of Pineville is 420 cfs and from the dam 335 cfs.

Yesterday the anglers we spoke with who fished the DSR reported having another very good day with a steady movement of kings. In the lower end of the river anglers also reported getting into kings at the Black Hole, Staircase/Longbridge, Town Pool, Ballpark, and Papermill. In the mid to upper end of the river anglers reported fish holding in and around the deeper holes and larger runs such as the Sportsman Pool, Pineville, Trestle Pool, Ellis Cove, Schoolhouse Pool and Lower Fly Fishing area. The most productive patterns have been estaz eggs, sucker spawn, beadhead woolly buggers, fish skull zonkers, conehead bunny muddlers and egg sucking leeches.

Anglers have been finding mainly calm conditions on the lake over the last few days. Sunny, pleasant days are in the forecast through later on Sunday. The walleye bite over the last few days has been a bit slower although they can be found in a variety of depths from close to shore, in shallow water and out in areas of 30 feet of water. The walleye night bite has also been productive. Anglers are finding some bass and perch have been reported along the north shore. Worm harnesses, blade baits and stick baits have been working well.