This report courtesy of the Oswego County Department of Community Development, Tourism and Planning. This report was written on September 12, 2019.

Typically the lake fishing season would be winding down at this point but it continues to be very good both for staging salmon and the offshore fishery. The wind is again an issue today keeping boats at the dock but conditions are expected to improve for the weekend. The lake is producing some nice size salmon with a beautiful 34.2 pound specimen caught aboard Top Gun Charters recently.  Spoons, flashers and flies and cut-bait are still working. 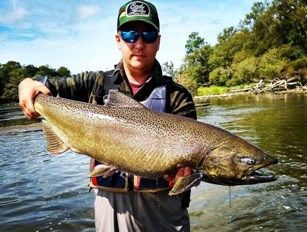 After some rain over the last 48 hours the water flow reached 3,190 cfs yesterday afternoon. This morning it is flowing at 2,640 cfs. Anglers are finding a few early season kings along with a brown trout or two with no heavy push of kings as yet. Drifting an egg sac, skein, bead, or fly along the bottom is a common technique for anglers targeting early run kings at the Varick Dam. The other common technique for targeting early run kings is throwing deep diving lures off the wall. We are also seeing a variety of fish in the river including smallmouth bass, walleye, rockbass, sheepshead, channel cats, carp, and longnose gar in the river. Bottom bouncing and slip float fishing with gulp minnows, crayfish, and night crawlers has been effective for catching fish from shore over the past week or so.

Yesterday most anglers reported there was good movement and great fishing within the time frame of sunrise and midday. As the sun rose higher, however, movement slowed considerably. In the lower and higher areas of the river there were reports of flurries of fish, movement in 1’s and 2’s, and there was constant fish movement throughout the day. As usual, at the end of the day, the reports were that there were considerable fish moving. With rain overnight, cooler temperatures and some overcast skies, today should be good on the run. The water flow out of Pineville is 453 cfs and from the dam 335 cfs. 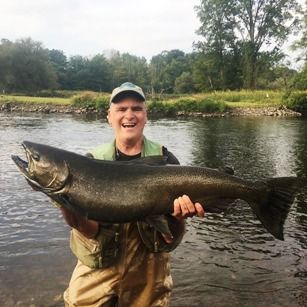 The majority of anglers we have spoken to have been mostly fishing the lower end of the river with areas such as the Ballpark, Town Pool, Longbridge/Staircase, and Black Hole producing the best action. Those that have fished the mid to upper end of the river reported fish holding in and around the deeper holes and larger runs. Anglers have been getting into mostly kings but a few Cohos have shown up over the last couple of days. The most productive patterns have been black or olive woolly buggers, black or purple egg sucking leeches, orange chartreuse or pink comets, glo-bugs and estaz eggs.

Bass have begun feeding on young gizzard shad so look for bird activity and you will likely find some action. The walleye bite has slowed a bit which is typical this time of year as they begin to feed on young gizzard shad but you can still find them in up to 25 feet of water. A variety of baits are working including worm harnesses, blade baits and stickbaits.