This report courtesy of the Oswego County Department of Community Development, Tourism and Planning. This report was written on October 21, 2019.

The rainfall last week increased the flows to a point where fishing off the wall is limited to only one or two spots. The flow has been running between 12,000-14,000 cfs for a few days. This morning it is flowing at 12,000 cfs.

Sunday the fishing was challenging. The upper end of the run saw a pick-up after 3 pm with mostly steelheads. Today is an odd day (21st) with special regulations in effect for the Meadow Run – odd days are fly fishing only. The fog has lifted leaving us with the prospects of a gorgeous Fall day.  Reason enough to be down on the water, but the reports thus far suggest a relatively slow day. But, of course, it is still early and things could change at any time.  The upper end of the run has seen a few hook ups, as has the middle section (which is fishing somewhat better) and the lower end of the run is very quiet at this time. Water flow out of Pineville is 519 cfs and out of the dam 350 cfs through the 23rd of October.

According to Whitaker’s Sport Shop and Motel: 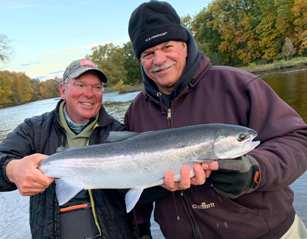 Two days in the Douglaston Salmon run with our client. The first day was pretty slow.  We took one early then we put in a long day for a couple more. Yesterday with the overcast skies the bite was much better. We had a bunch early then had a little lull and we finished strong. It was a good day!

With the cooler temperatures the night walleye bite has slowly picked up. Casting stickbaits from shore just before and after dark is a suggested application for walleye this time of year. The wind has been an issue the last few days for any deeper water fishing which is winding down.

The pond is quiet this time of year.