This report courtesy of the Oswego County Department of Community Development, Tourism and Planning. This report was written on October 18, 2019.

The rainfall we have received in the last couple of days has definitely affected the river flow. This morning it is running at 12,500 cfs. With this flow, fishing some areas of the river is difficult so use caution. The weather is expected to slowly clear with Saturday and Sunday predicted to be nice fall days. Early in the week fish seemed to be active in the harbor area and with the increased water flow in the river, a good number of fish are expected to push up through the river. Anglers are finding salmon, steelhead and an occasional brown trout. Suggested baits are skein, deep diving thundersticks, egg sacs, beads, and marabou jigs. 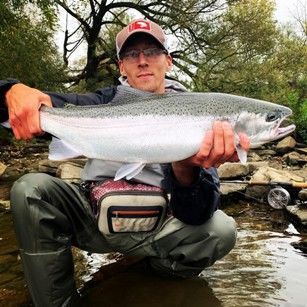 As salmon begin dropping their eggs, beautiful specimens of steelhead start showing up to gorge on them. It truly is a special time of year on Lake Ontario tributaries.

With the rain on Wednesday anglers reported good numbers of fresh kings scattered throughout the run. In addition, the steelhead fishing was very good.  Reports from our anglers and river patrol yesterday afternoon indicated a minimal pickup in activity, however, still small pods of fish with sporadic movement.  A bit of stain in the water throughout the day and one thing’s for sure, the leaf bite has definitely turned on!  Most anglers indicated a fair day picking away at steelhead with a number of kings in the mix as well as a few brown trout.  The upper sections of the property reported the most activity, while the middle sections remained fairly quiet in the evening.  The river flow remains at 350 cfs at the dam but has increased to 747 cfs from the Pineville gauge. 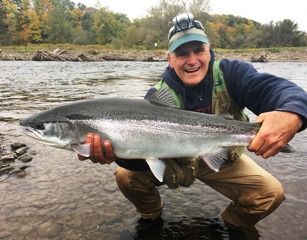 According to Whitaker’s Sport Shop and Motel:

With the recent rain it’s no surprise we had increased runoff along with plenty of leaves and off color water conditions in the lower end of the river. The best water clarity and least amount of leaves was in the upper end of the river between Ellis Cove and Altmar. Despite less than ideal conditions some anglers did report getting into mostly kings as well as a few steelhead in both the upper and lower end of the river. The most productive patterns have been estaz eggs, glo-bugs, sucker spawn, bunny leeches, egg sucking leeches, flesh fly, hot stones and woolly buggers.

With the cooler temperatures the night walleye bite has picked up. Casting stickbaits from shore just before and after dark is a suggested application for walleye this time of year. The wind has been an issue the last few days for any deeper water fishing which is winding down.

The pond is quiet this time of year.