This report courtesy of the Oswego County Department of Community Development, Tourism and Planning. This report was written on October 10, 2019.

The lake fishing report has ended for the season.

Monday afternoon the river flow spiked to nearly 7,000 cfs. It has been flowing between about 4,000 and 6,000 cfs since then. This morning it is running at 4,920 cfs with a water temperature between 60 and 61 degrees. With the higher water flow and the water temperature continuing to drop, hoping to have some good fishing action this holiday weekend.  Anglers have been using skein under slip floats and deep diving thundersticks off the wall.  Egg sacs, beads, soft plastic eggs, marabou jigs, and skein have all been used lately to catch salmon at the dam.

We have been working for them for sure the last few days but capturing a few every day. Making lots of smiles! 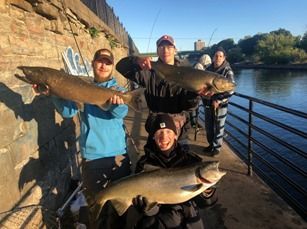 The action last weekend for our salmon tournament was not hot and heavy with the steady south wind and sunny conditions but most teams managed to post 2 or 3 fish on the board with 28 anglers participating.

Over the last couple of days anglers in the mid to upper end of the river reported getting into kings in the Papermill, Sportsman Pool, Pineville, Trestle Pool, Schoolhouse Pool and the Upper & Lower Fly Fishing Zone. With the recent rain anglers also reported getting into some kings in some of the smaller local tributaries. Once again the key to success has been covering lots of water and making adjustments. The most productive patterns have been estaz eggs, sucker spawn, glo-bugs, hot stones, egg sucking leeches, comets, muddlers, zonkers and woolly buggers. The river flow is currently 350 cfs at the dam and 442 cfs at Pineville.

Fishing has diminished throughout the past couple of days. There are still anglers coming up with fish but there has been little presence of any fresh fish coming into the system. Most being taken are the fish that are in “spawning mode”. There has been sporadic movement down throughout the entire run. In the mix has been some steelhead and browns, with primarily kings. On Tuesday as the river patrol came off the water they reported good numbers of fish showing up in the estuary so hopefully they will begin moving into the river. “Slow but productive” is the way to characterize yesterday.

After eating bananas and taking a beating on day one our client recovered nicely and landed a few browns, kings and a beautiful diamond bright steelhead on Sunday. It was his day on the Douglaston Salmon Run with no bananas! Our clients from Colorado found a tough bite with little to no movement Tuesday morning. We hung a few and landed two nice clean fish and they were happy with the results. They had beautiful sunny skies, a scenic river, nice people to fish around and they can cross another fish off of their bucket list. 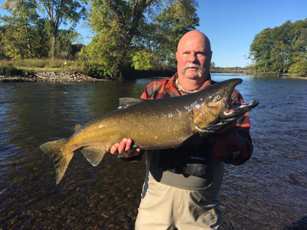 With the cooler temperatures the night walleye bite has picked up. Casting stickbaits from shore just before and after dark is a suggested application for walleye this time of year. If you are still interested in fishing the deeper waters for them, worm harnesses, blade baits, and stickbaits are suggested baits to try. For bass, keep an eye out for bird activity or for fish breaking on the surface. This species can provide some exciting fishing.

The pond is quiet at this time.