This report courtesy of the Oswego County Department of Community Development, Tourism and Planning. This report was written on May 23, 2019.

Notice: Due to high water levels, a local state of emergency order for a “No Wake Zone” has been established for boats 1,000 feet from the Lake Ontario shoreline and tributaries. All motorized boats within 1,000 feet of the shoreline and within these waterways must operate at an idle speed.

Monday brought crazy weather clouds, sun, wind, rain and then big wind but we still managed a decent box including a nice double on Lake Ontario chinook salmon. Yesterday we found plenty of kings right outside of the Oswego Harbor. Even after Tuesday’s rough seas we still put together a decent catch. 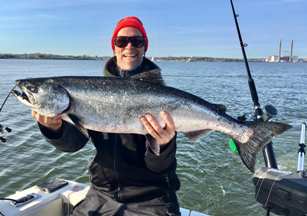 We have had some dry weather the last couple of days. The water flow is running at 14,700cfs this afternoon. Although still high, this is an improvement. The Oswego River has started fishing well again. Smaller walleyes are being caught in the upper river and a good number of smallmouth bass have been landed in the lower river. We have not seen the big push of walleyes in the river as yet. For walleye try bottom bouncing night crawlers or using a bucktail jig tipped with a night crawler during the day, and throwing hard lures at night. Anglers were catching bass using bucktail jigs, tube jigs, and night crawlers in the lower river. Smallmouth bass, rock bass, and sheepshead seem to be the most active biters in the river right now.

We had nearly a dozen anglers on the run Tuesday which is busy by mid-May standards. Most anglers were able to get into a bass or two, but some did go home without a tug on the line. A couple anglers reported getting into a few steelhead in the first half of the day but they were the minority. We had reports of carp and gar in the lower part of the Run. The water was also described as slightly colored, likely due to all the runoff from recent storms. A half dozen anglers enjoyed yesterday on the run and reported landing two steelhead among several nice smallmouth. One of the steelhead was a fresh 24″ beauty. Water flows have increased to 1,200cfs through midnight tonight.

Boaters and anglers should continue to use caution when out on the water as there is a large amount of debris floating in the lake. Anglers are finding walleye fishing from shore or in 20-30 feet of water. Shore anglers are also finding a bullhead bite along with a few crappies. Water depths of 10-15 feet are producing some perch.

With the unsettled weather pattern, we have not had a lot of reports from the pond. Anglers are reporting some walleye but overall the bite is slow.