This report courtesy of the Oswego County Department of Community Development, Tourism and Planning. This report was written on May 13, 2019.

Saturday Mother Nature finally brought us blue skies and some sun. It was short lived, however, as we were back into the rain again yesterday. Anglers worked through all conditions this weekend bringing kings, brown trout and a few Atlantics to the net. 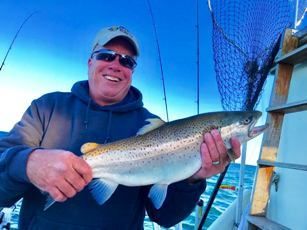 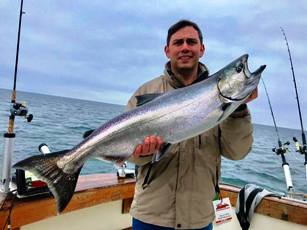 With the continued rainfall, the river flow started climbing on Friday and continues to do so. This afternoon it is flowing at 18,500cfs. This makes shore fishing difficult for anglers. Anglers interested in fishing for walleye should focus their efforts from the 104 Bridge to the mouth. This rain is going to keep some of our beloved steelhead in the bigger Lake Ontario rivers for longer than usual this spring. Area streams and creeks are also options with the water conditions.

Click here for the Brookfield Varick Fish Safely Brochure below.

The water flow is currently scheduled for 1,700cfs through midnight tonight. Yesterday one angler scored a solitary steelhead swinging flies throughout the middle and lower sections of the river. Two others had swung flies in the upper section and stated they had brought to hand seven notable smallmouth bass, but had lost track of the total number. They did also get takes from two very small steelhead “smolts” as they were described. These anglers used essentially the same flies, woolly buggers, intruders and streamers. The final angler coming in brought to hand not only a 22 inch steelhead but an estimated 9 pound Atlantic salmon. Overall about half of our anglers saw action yesterday.

The anglers we spoke with reported getting into a few dropbacks and smallmouth bass in the lower end of the river. In the afternoon the tailouts of the bigger holes and larger runs seem to produce the best action. Anglers who were fly fishing had the most success swinging streamers with sinking leaders. The most productive patterns were black and olive woolly buggers, brown, olive or black conehead muddlers, peacock steelhead buggers or black and olive bunny leeches. Anglers who were float fishing had success with pink and blue egg sacs or pink worms. Since yesterday scattered showers have been moving through the area.

Windy conditions have continued to keep anglers off the lake at times. When conditions are good, anglers are finding walleye in shallow water and in 20-30 feet of water. Bucktail jigs and trolling worm harnesses are suggested applications. Perch are responding in 10-15 feet of water and bullhead are active for shore anglers.

Walleye season has opened and reports indicated the bite was a bit slow. With the cool, rainy weather we have not had a lot of reports.