This report courtesy of the Oswego County Department of Community Development, Tourism and Planning. This report was written on May 10, 2019.

According to Capt. Andy Bliss on Cold Steel Sportfishing Charters: 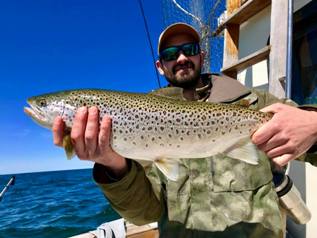 Overall the fishing has been excellent out of Oswego. Anglers are finding brown trout, salmon and some nice lakers in the mix. UV tape Stingrays continue being our best lures. Many colors are working as long as they are UV. The last couple of days have been a little tough with big northeast winds, dense fog and then a mega south wind but those conditions couldn’t stop us.

It’s not typical to catch May chromers that haven’t spawned yet on the Oswego River. One beautiful fish came as a pleasant surprise after catching nothing but big smallmouth for a few hours. It looks like the trout will be in for a few more weeks before water temperatures increase and the flow drops. With the flow 9,940cfs, the lower river offers the most fishable water for shore anglers. Anglers who are interested in fishing the Oswego River for walleye should focus their efforts from the 104 Bridge to the mouth. If the walleye haven’t made a major push into the lower river yet, then they can be targeted in the harbor and along the lake shore.

Yesterday we had 22 anglers fishing the run with some arriving as early as the crack of dawn. Most of them got into some fish, either steelhead or smallmouth bass. One lucky fellow went two for five on steelhead and filled in his time with 19 smallmouth bass. The last three anglers came off the water at dusk and reported success in the middle and upper sections swinging large black leeches and what looked like a large white Muddler (actually turned into a streamer when fished) along with nymphs and black/purple Intruders.

Over the last couple of days our best reports have come from the lower end of the river where anglers are getting into a mix of dropbacks and smallmouth bass. The dropbacks typically like the faster water and are generally suspended in the water column. They tend to hold in the head or tailouts of the deeper holes and larger runs. The smallmouth bass generally hold in the slow and softer water along the edges of the deeper holes and larger runs.

The walleye season opened on Saturday and although there were some fish caught, overall reports indicate the action was a bit slow. Suggested areas for some activity are along the shoreline and in 25-30 feet of water. Bucktail jigs and trolling worm harnesses are suggested applications.

Walleye and northern pike seasons are open. Anglers over the weekend found some activity but overall it was a bit slow.