This report courtesy of the Oswego County Department of Community Development, Tourism and Planning. This report was written on April 4, 2019.

The water is at a good level to fish from shore right now. The flow this morning is 6,660 cfs. Browns and steelhead are biting in the Oswego River right now. Browns are showing a preference for jigs and steelhead are responding to egg sacs or beads. As we ended the month of March, we saw a nice mixed bag of post and pre-spawn steelies in the system. April is lining up to be a solid month of trout fishing.

Yesterday was a great day on the water. The jig bite was incredible! 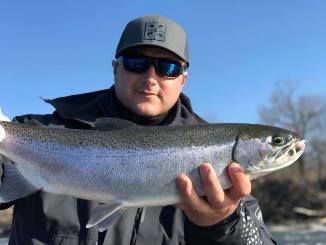 Notice: The bridge to Leto Island is closed, and there are mandatory personal flotation device (PFD) zones on the river. For more information, view the Brookfield Varick Fish Safely Brochure below.

Yesterday was another day of beautiful weather but the wind threw a wrench in things making fishing a tad more difficult.  A few anglers joined us on the run today, indicating a rather successful day despite increased flows and wind.  Those anglers were able to bring 1’s and 2’s to hand.  The steelhead that were caught were dropbacks.  Another angler landed a brown which had yet to begin spawning with a belly full of eggs.   Water from the reservoir remains at 1200 cfs and the current flow at the Pineville gauge is 1640 cfs.

Over the weekend and yesterday strong winds moved a good deal of the remaining ice. As temperatures reach into the 50s and near 60 degrees over the weekend, we begin to look toward the open water fishing season.

There is little to report from the pond at this time.